Part Three of “The Golden Years”

Mickey stumbled up the four pairs of stairs and sat down panting against one of the coal bins that lined the sides of what we called ‘the attic’. It was not really a room, merely a six by eight foot space that had a window to allow access to the hoisting beam. All Amsterdam buildings had one, their stairs far too narrow to manipulate furniture up or down. But seen from afar, it seemed that the poorer quarters of the city had an endless mass of ready-made gallows waiting for the eruption of a bloody revolution. 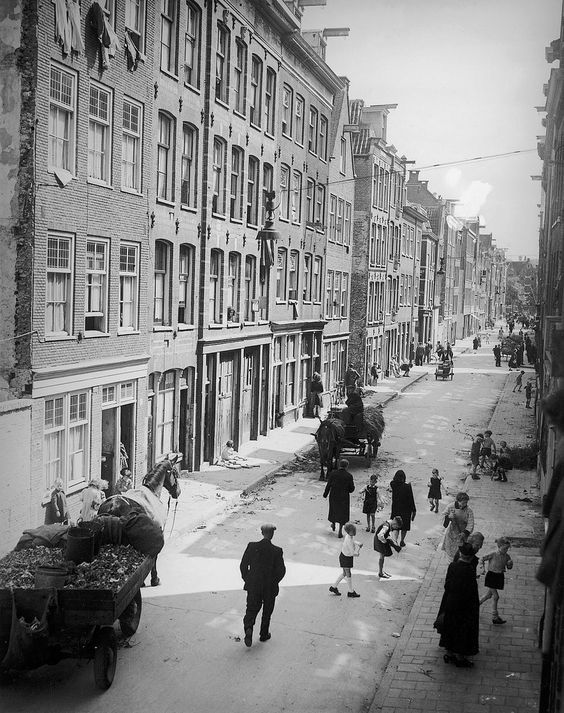 I unearthed my hidden treasures from behind my parent’s coal-bin; four cardboard model sailing ships that I had  patiently glued together and an old cigar-box filled with dummy men made out of cotton pipe cleaners and wrapped with various colors of knitting wool. I had given the ‘Spaniards’ red and yellow, the ‘French’ blue and red and the ‘British’ just plain blue. The ‘Dutch’ were all black as they were the privateers, the raiders that pried on all the other sailing vessels. The advantage was that you could bend and form those little figures into all shapes that fitted the cardboard ‘ships’; standing at the wheel, brandishing swords at the rail or clinging to the spars and the masts.

With a small piece of chalk stolen from school, we outlined the ‘coasts’ and the ‘island’ on the bare floor boards and used an old shoebox as the island’s ‘fortress’ from which the marauding privateers would set sail. The toss of a coin decided who would be ‘Dutch’, the other party could be any nationality as long as it was Spanish, French or British. The loser had to sail first, the ‘Dutch’ being the raiders.

We played for hours in that place, never winning or losing and re-adjusting the battle to what we liked, with the rain pattering on the roof and the light gradually growing dimmer and dimmer. We were in a fairly frantic battle around the ‘island’ when my mother’s head suddenly popped up from the stairwell.
“Having fun?” she asked and we both dropped the pieces of coal we had used as gun shells.
“Yes mom”, I answered.
“Well, it’s getting dark; Mickey has to go home and we’ll eat as soon as dad is in.”
And with those words she disappeared down the stairs.
The two of us were sitting dumbfounded. The spirit of battle was all gone and it was really getting too dark to see clearly. With a sigh, I started to collect the discarded puppets and put them back in the old cigar box. 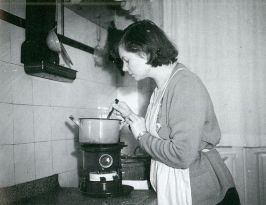 A smell that made my mouth water hit me when I entered our apartment. I loved the way mom cooked sauerkraut, mixed with briefly fried spare-ribs and mashed potatoes. My stomach rumbled; I had eaten nothing since those rolls at the market. But there was nothing to snack on in the house so I had to wait until my stepdad came in.

“Did you do your homework?” she asked.
“Not yet” I replied; my teacher had insisted on giving me additional exercises to be done at home.
“Then go and do it before your dad comes home!”
I sat down under the single large lamp suspended on a chain over the dinner table that occupied most of the floorspace of our living room; the stove, a cupboard and an easy chair took up the rest. For a while I worked on my chores. Then the noise of the street door and heavy footsteps coming up the stairs announced the arrival of my stepdad. The door opened and he stepped in, dripping wet from his bike ride. I immediately sensed he was in a bad mood and grabbed my school things and scurried away from the table.
“What’s he doing?” he asked gruffly as he hung his soaked overcoat on a peg outside and closed the door it with a bang.
“He’s got some extra work for school; there’ll be a test to see what kind of school he can go to later”, answered my mother.
“All bloody nonsense”, he growled as he sat down in the easy chair. “He has to learn how to read and write and do some sums. Then he can go and work for a living just like I do.”
“But maybe he–”
“Shut up! Everybody in our family has worked with his hands! He’ll do the same!”
“But he has to–”
“I know; he has to go somewhere else some time. So let them send him to a trade school; he won’t be a bricklayer but maybe he can be a plumber. They earn good money.”
“But maybe he–”
“I don’t want him to go to one of those fancy high schools; all they teach is capitalist nonsense.”

After supper I finished off my homework and by eight I went to bed. After putting the hot water bottle between the sheets my mother kissed me and tucked me in. She switched off the single lightbulb and closed the door and I pressed my feet against the radiating heat of the stone bottle in that thick old sock. As I snuggled down, I thought about my stepdad’s words. Becoming a plumber? I’d seen one at work one day, opening up a sewer to unblock it and repair some pipes and the sight and the smell had been enough. But what else would there be for a boy like me? Carpenter? I loved the smell of wood and the way you could work it. Or maybe I could be an electrician? Electricity was a mystery in our house. The few times my stepdad had tried to fix something had all ended in disaster; fuses blown and hands scorched by sudden angry blue sparks. I thought a little bit about it and decided better not – he would be angry that I knew things he didn’t.

As I slowly drifted into sleep I decided to wait for the weekend and ask my granddad. Surely he could help me; granddad always knew things and gave straight answers that I could understand. …